Accepting the use of multiple languages in Brussels is vital for making people feel like they belong in the city, according to Sven Gatz, Flemish Minister for Culture, Media, Youth and Brussels Affairs. Everyone uses more languages in Brussels than ever before, and that can only be a good thing, said Gatz in an interview with The Brussels Times on the launch of his new book Molenbeek/Maalbeek: A Brussels Tale, in English.

“A New Yorker, no matter where they are from, feels like a New Yorker,” said Gatz. “The same cannot be said for someone who has lived in Brussels for years, and this is something which needs to change,” he added. Language is a way to do that, he added.

According to the results of the Language Barometer by the Free University of Brussels (VUB), over 80% of the population of Brussels speaks French well to very well. English is second, at nearly 35%, followed by Dutch at approximately 16%. Arabic comes in fourth place, followed by Spanish, Italian, German and finally Portuguese.

“We struggled with languages for so long in Belgium, but now other languages are not seen as a threat,” explained Gatz. Through publishing this very Brussels story in multiple languages I hope to continue that, he added.

The book deals with the terrorist attacks of 22 March 2016, and the shock impact they had on Brussels. Not just for those living in the city, but also for policymakers in charge of the city, from various backgrounds, policy fields and nationalities.

Using narration from the perspectives of seven characters, Gatz relives the attacks at Zaventem airport and Maelbeek metro station. Through the eyes of fictional characters Hamida, Clive, Nina, Claude, Ghazi, Erik, and Francoise, Gatz introduces the reader to a traumatised, yet hopeful Brussels. 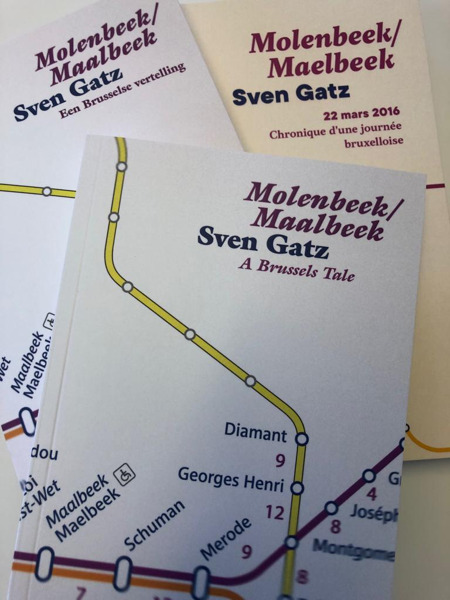 While many characters drew some inspiration from real people, the British character was a completely fictional creation, says Gatz. “I wanted to show Brussels through someone else’s eyes, and of course, the choice of a British person was intentional,” he adds.

As much as the events of the book are set before the Brexit vote, the feeling of inclusivity should remain the same, said Gatz. There is even an implicit statement in the book that the Brits are part of the city, he added.

The book is available in English, Dutch and French.

Energy prices: EU’s demand and supply dilemma in importing natural gas
The European Commission adopted last week a plan on how to tackle the rise in global energy prices in the short-term while relying on the transition ...
Tram line and cycle path to connect Brussels’ outskirts to airport
Works on a tram line connecting Brussels, the NATO headquarters and Brussels Airport in Zaventem, which could attract up to 10,000 passengers a day, ...
SKYFALL: European police complete counter-drone training in Antwerp
In a joint project between Belgium’s federal police and the Brussels Capital Ixelles Policing Area, 15 European police officers visited Antwerp to ...
Offshore wind farms could help reach climate neutrality by 2050
A study carried out by the Bureau fédérale du Plan (BFP) – an independent Belgian organisation that investigates questions of environmental and ...
STIB launches free transport for Museum Night Fever this weekend
STIB buses will run between Brussels museums for free on Saturday night as part of the Museum Night Fever celebrations taking over the capital.  ...
Heirs of Michael Jackson demand that Belgian radio show ‘King of Pop’ changes name
The heirs of American pop singer Michael Jackson have demanded that a Belgian radio programme, called "King of Pop" changes its name, their lawyers ...
More than one billion coronavirus vaccines exported by EU
The European Union (EU) has exported more than one billion coronavirus vaccines globally over the past ten months, of which just under one-tenth was ...
SNCB brings free little libraries to stations
The Belgian railway company SNCB is adding free little libraries to its stations. The “book boxes,” as they’re called, allow passengers to grab a ...
Belgium in Brief: What Is Bouncing Back?
What do you think of when you think of a country "bouncing back" after a crisis?  Cambridge Dictionary says it is "to start to be successful again ...
Will Brussels bounce back?
The lockdowns have tested the city and forced it to confront key questions about its future. Derek Blyth looks back at an extraordinary moment in our ...
Café patron stabs manager after being asked to see proof of vaccination
A customer stabbed a café manager in Brussels on Saturday after being asked to show his Covid Safe Ticket (CST), according to Bruzz. Asking to see ...
Belgium to simplify administrative processes with ‘digital wallet’
The federal government wants to create an online "wallet" for all people living in Belgium which would bundle all official documents, from visas to ...