Where are Belgium’s Christmas markets?

There are several Christmas markets in different cities across the country that are well-known for their holiday festivities. Credit: City of Brussels — www.brussels.be, Ghent Winter Festival/Facebook, Raju Jasai/Facebook.

As the holiday season enters its fourth week, chalets in Christmas markets across Belgium have opened their doors to welcome tourists and residents alike to taste Christmas treats, sip hot wine and explore the stalls for original Christmas gifts.

But, where are these markets, full of Christmas treats and snacks, to be found?

Here are some of Belgium’s best-known Christmas markets that are worth paying a visit.

From 7 December until 5 January 2020, the city of Antwerp welcomes visitors to an enchanting winter atmosphere, full of the hustle and bustle of Christmas markets and other activities.

At Antwerp’s Christmas markets, comprised of over 90 stalls, tasty treats and gifts can be bought, such as ‘spekpatatjes’ (fried potatoes with bacon), hot chocolate as well as several treats from abroad- for example, fish and chips. There will also plenty of vegetarian and vegan-friendly options at the markets, which will be located at Grote Markt, Suikerrui, Steenplein and Groenplaats.

In addition to the Christmas markets, the city will play host to several giant Christmas trees, an ice-skating rink with a nearby bar, a winter funfair and a giant Ferris wheel from which a sweeping view of the city centre can be seen. There is also a winter forest full of tree sculptures and sparkling lights to be found in front of the Our Lady Cathedral.

Antwerp will celebrate New Year’s Eve with a firework display that will be launched from a pontoon on the river Scheldt. The firework show will last for around 15 minutes. 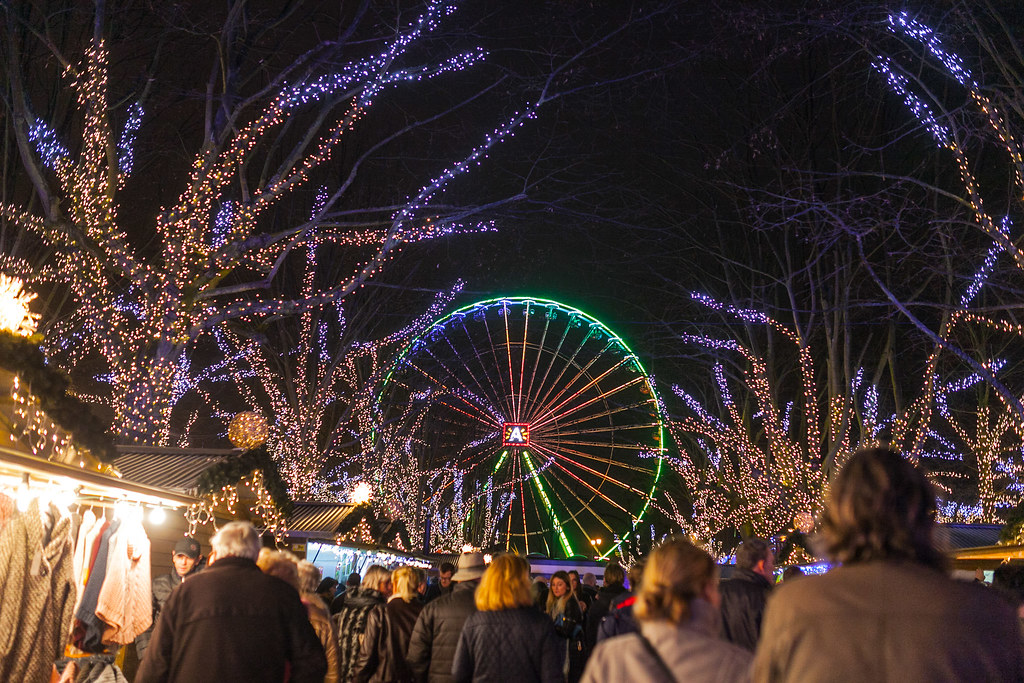 The Ferris wheel at the Antwerp Christmas market in 2016. Credit: Raju Jasai/Facebook.

From 6 December to 5 January 2020, Christmas markets are set to transform the landscape of Ghent’s city centre for the Ghent Winter Festival.

Some 150 craft and food chalets will line the medieval centre of the city along the streets starting at the Sint-Baafs cathedral, on the Botermarkt, Gouden Leeuwplein, Klein Turkije, right up to the end of the Korenmarkt.

From 14 December 2019 to 5 January 2020, Ghent’s medieval castle, or ‘Castle of Counts’, turns into a Winter Wonders castle, where visitors can wander through the dark spiral staircases inside the thick castle walls.

The city’s winter festivities also offer an ice-skating rink in the city market hall, several winter pop-up venues, including Husky and Moose bar, as well as a number of live shows.

Bruges opened its Christmas markets to the public slightly earlier than most other markets in Belgium, kicking things off on 22 November. As part of the medieval city’s Winter Glow festivities, the Christmas markets will be open until 5 January 2020.

The markets will be strewn across the Market Square and Simon Stevinplein Square, in the centre of the city, also a UNESCO World Heritage site.

Accompanied by choral concerts, visitors to the Bruges Christmas markets will have the opportunity to taste spiced glühwein, Belgian beers, cheeses and shop for original Christmas gifts, among the wide range of handmade goods on offer.

Other attractions made available by the city as part of its holiday festivities are illuminated trail walks with elaborate light installations, an ice-skating rink and the Bruges Party on New Year’s Eve that sees the public, led by a conductor and choir, singing some of the biggest hits of recent years.

Often cited as the oldest Christmas market in Belgium, the famous Christmas village in Liège will play host to some 200 chalets from 29 November to 30 December 2019.

The winner of the European Capital for Christmas in 2018, the Liège Christmas village boasts impressive light installations, three Christmas villages, an ice-skating rink next to the cathedral, a craft village, a sound and light show in the Saint Paul’s Cathedral and the European circus festival, which sees the best circus artists in Europe participate in performances.

A post shared by Province de Liège Tourisme (@provincedeliegetourisme) on Dec 1, 2019 at 1:30am PST

The Winter Wonders Christmas festival in Brussels, which has been nominated for as the best Christmas market across all of Europe by the organisation European Best Destinations, will sprawl through the Belgian capital from 29 November until 5 January 2020.

For over five weeks, 250 wooden chalets can be found in Place Sainte-Catherine, in Ixelles’ Place Sainte-Croix and in Etterbeek’s duo of Finnish and Swedish markets, filling the city centre.

At this years’ Christmas markets in Brussels, there will be an ice-skating rink, fairground attractions, pop-up villages, a Dome for viewing documentaries and films, as well as many more activities.