Why many Catalans would prefer federalism over autonomy

Friday, 18 June 2021
This is an opinion article by an external contributor. The views belong to the writer.
Tom Canetti

The term federalism has been revived in Catalan political discourse over the last two decades, and even more so after the recent election of Pere Aragonès and the Republican Left Party (ERC) as head of the Catalan government.

Often accompanied in the same conversation with the topics of sovereignty or autonomy, federalism, or lack thereof in the Catalan case, refers to the legal and political division of power between regions and the executive.

On a high level, territorial federalism can be defined as the mode of organization that unites separate regions within an overarching polity that allows each to maintain its own integrity. The way in which this separation of power is to be organized, should be negotiated between the states and overarching central executive.

The relationship that federalism is concerned with, is the one between the region (Catalonia) and executive (Spain). The reason why federalism is so important, especially from a republican lens, is that it aims to legitimize this relationship. Federalism provides an avenue to reduce arbitrary domination by providing more security of freedom for regions, who, as they are the minority group to the executive, are prone to being dominated.

The context of federalism is especially relevant in instances of multinational countries like Spain or Canada. The Catalan culture is distinctly different from the Castilian one, made most clear by their different languages. The cleavage between the two nations however is much more complex than linguistics, historically and politically.

Differences aside, twenty years ago, a multinational state where Spain and Catalonia could live under the same polity seemed somewhat feasible for most. After the death of Franco, Spain started its democratization process. In 1979, the Statute of Autonomy of Catalonia was created. For Catalans, this seemed like a good start, but it still lacked crucial details necessary to make them feel properly represented in Spain. So following the 2003 regional elections, the primer tripartit, the three-party left-wing coalition government composed of the PSC (Party of the Catalan Socialists), ERC (Republican Left of Catalonia) and IC-V (Initiative for Catalonia – Greens) aimed to reform the 1979 Statute.

At the time socialist leader José Luis Rodríguez Zapatero, who was later successful in winning the general elections, declared that he would accept the proposed statute by the Catalan Parliament, which consisted of the following points:

This is where things, which were starting to look positive for Catalan freedom after a dark history of suppression in the 20th century, started to turn sour. In 2006, shortly after the statute was submitted to the Spanish Parliament, more than 50% of the articles were modified in a ‘trimming’ process. As a result of this, ERC chose to campaign for a “no” vote in the referendum to be held in Catalonia to ratify the trimmed statute.

On June 28, 2010, the Constitutional Court ruled that 14 articles of the statute were totally or partially unconstitutional. The ruling made the following, among others, orders:

This battle between the Catalan nation and the Spanish Constitution — and its enforcers — represents the insufficiency many Catalans feel with their lack of federal powers. The Autonomy Statute, according to many commentators, was deemed essentially meaningless after the 2010 rulings of the Constitutional Court, which revealed just how little ‘autonomy’ Catalonia has, rather, they must be at the political and legal mercy of the executive.

Now that we can see the shortfalls in the division of powers between Spain and Catalonia, we can take a closer look at federalism and why Spain once again cannot be considered a federalist country. Professor of Political Science at Pompeu Fabra Universitat (UPF) Ferran Requejo, outlines that a country’s levels of federalism and decentralization can be indexed. 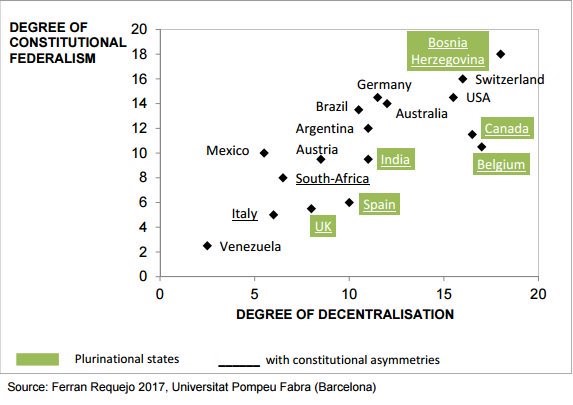 In the above graph, we can see how low Spain ranks in both federalism and decentralization, especially for a plurinational (multinational) state. Other plurinational states like Canada and Belgium rank much higher allowing for more self-government and self-representation for minority nations, such as the Québécois. The only plurinational state ranking lower than Spain is the UK, namely because of the case for Scottish independence — a cause which has bonded many Catalans and Scots together in solidarity, due to the similar nature of their struggles for emancipation.

Requejo outlines that a federalism should be assessed by the existence, or not, of federated polities as constituent units. This is evaluated through the following aspects:

To prove that Spain is not a federation, with respect to the above requirements, Requejo notes the following:

Finally, a broader outlook on Catalonia’s role in the EU is important in understanding the shortfalls of autonomy rather than federation or sovereignty.

Provisions for the participation of regions in EU policy were made in the (Maastricht) Treaty through two channels: directly into the EU and via member states. The Committee of the Regions was established as a consultative body with the same status as the Economic and Social Committee.

Whilst this showed positive signs for non-federated regions like Catalonia, the Committee was purely consultative and has received criticism for falling short in facilitating adequate representation for sub-state regions.

Federated units, like the German Länder, enjoy a defined role in policy making in the EU, whereas autonomous regions like Catalonia, do not. This paints the picture, or rather, shines a spotlight on the grim reality that Catalonia is being dominated politically and legally, not only in the context of Spain, but in the supranational context of Europe.

Just like the Scots, Catalans are appealing for the recognition of their nation, which can only be realized by the proper institutional framework necessary for a multinational state.